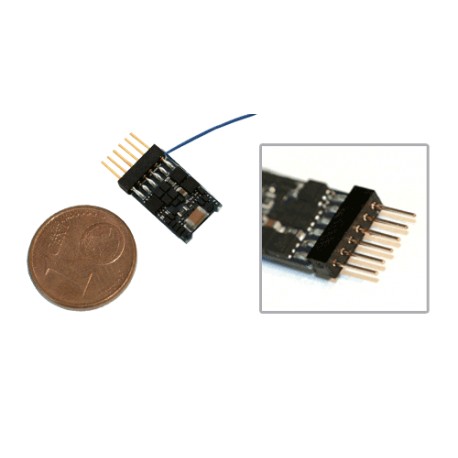 The LokPilot micro V4.0 is a real power pack. It can drive the locomotive with a power output of up to 0.75A and, in contrast to its predecessors, has shrunk significantly: the smallest of the LokPilot V4.0 family is only ridiculous 10.5 mm x 8.1 mm x 2.8 mm small and should thus also finding its place in the smallest locomotives of the nominal sizes N or TT.

LokPilot micro V4.0 decoders are offered with all common interfaces: in addition to the well-known 6-pin NEM651 connectors (with and without cable harness), there is also a variant with 8-pin NEM652 plug or - all-new - a cable version with the new Next18 Interface.

Depending on the variant, the LokPilot micro V4.0 recognizes the DCC, Selectrix® and Motorola® protocol. In DCC mode it can be operated with 14, 28 or 128 speed stages or can be used on analogue DC systems. You can use either two-digit or three-digit (1-127) or four-digit (1-9999) addresses or assign a traction address (consistAddress).

The Motorola® protocol allows the decoder to operate with Märklin® control panels 6020®, 6021®, delta®, mobile station® and central station®. In this case, he has the addresses 01 - 255. A second address can also be used to switch from F5 to F8.

The Selectrix® protocol allows the use of the LokPilot V4.0 decoder with these proven systems.

All common DCC brake systems, such as the well-known Lenz LG100, but also the new Lenz ABC brake modules with asymmetrical DCC signal, are also taken care of as braking in the DC section with reverse polarity (Brake on DC) or the Selectrix® diode brake section. The Märklin® braking distance can also be used - even in DCC operation. Of course, the decoder can also calculate a constant braking distance so that your locomotives always remain correctly before the red signal regardless of the speed. Of course, LokPilot micro V4.0 decoders can also be used on analogue DC systems.

The decoder can switch between all operating modes (Motorola®, DC, DCC, Selectrix®) fully automatically during operation. This is important if parts of your system are controlled analogously (for example, shadow stations).

They expect from an ESU decoder rightly an excellent engine control. The LokPilot micro V4.0 is equipped with load regulation of the improved, 5th generation. In this case, the control frequency can be adaptively adapted to the speed at a base frequency of 40 kHz and provides for an even better, silently smooth, absolutely quiet motor run on many engines. The 10 bit A / D converter allows your locomotives to crawl super-slowly on the system. With Dynamic Drive Control (DDC), you limit the influence of the load regulation and can regulate the speed at the station and switch area, while on the (fast) route, the locomotive is slower on a hill.

The load regulation is perfectly compatible with all common engines, whether from ROCO®, Fleischmann®, Brawa®, Bemo®, Faulhaber® or Maxon®. 0.75A continuous current are more than sufficient for the above mentioned motors and offer enough power reserves even for long trainings.

The LokPilot micro 4.0 decoder can also be used on analog DC tracks. The engine control also contributes to the engine maneuver.

The LokPilot micro V4.0 decoder has two function outputs with a continuous current of 150mA each, which can be assigned individually. Two further unencrypted outputs can also be used for the control of special functions with the aid of an external transistor. All important lighting functions are available, such as flashing lights, flashing lights, flasher lights, fog lights, etc. The brightness of each output can be set separately. The decoder has automatic decoupling and disengagement for decoupling for clutches and now also offers a high beam function. The "LED Mode" ensures correct light effects when using LEDs.

You can connect a Powerpack to the LokPilot micro V4.0 (ESU 54670, see page 62). This energy storage supplies the decoder with energy if the current consumption is not optimal due to soiled rails.

With RailComPlus®, the decoder now registers automatically at matching central units and receives a new address if necessary. Forget the tedious typing and programming!