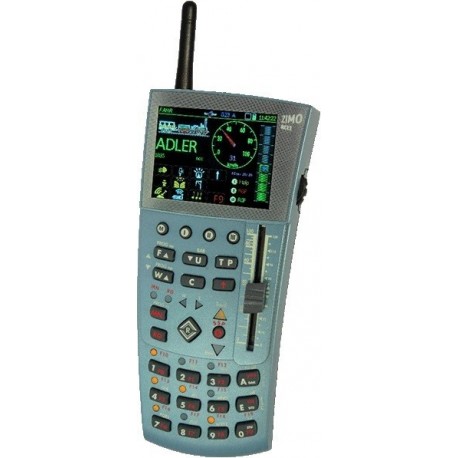 The MX32 and its MX32FU wireless version are the most important digital input devices
Multi-train control by ZIMO. They are used together with the MX10 central station as a digital center, or with their predecessors MX1, MX1HS, MX1EC, or with the ROCO control center Z21.

The exterior design of the MX32

Here, the "curved" design of the MX31, which has already become the "ZIMO trademark", has been taken up again and provided with slight corrections. The basic idea of this form of the cover- namely, the optional use of the device as a table-top console or as a walk-around hand controller - has proved itself with the users for many years. The OLED touch screen with a diagonal of 2.4 "and a resolution of 320 x 240 pix is the outward visible innovation of the MX32, and at the same time the prerequisite for the extended functionality and user friendliness.

Like the MX31, the new control comes in three versions: 1) as MX32 for the exclusive use on the CAN bus, or 2) as MX32FU with integrated radio module and permanently installed battery for optional use via radio or via the CAN Bus, while charging the battery via the bus cable, and 3) as the MX32ZL, the "central control unit" with built-in mini central unit. The operation is practically identical in cable or radio mode; only certain loading sequences (photos, larger files, ..) can take longer or can be interrupted by radio.

In contrast to the "old" system with 433 MHz, the ZigBee standard in the 2.4 GHz band is now used for radio communication within the ZIMO system. ZigBee's network capability allows the forwarding of messages from node to node (between the controls) when a device is currently in the radio shadow.

In order to make the software update as easy as possible, a USB (host) socket is installed, to which a commercially available memory stick with the new software version downloaded from the ZIMO website is plugged.

Also additional locomotive pictures, operating languages, signaling inter alia, are loaded into the device via a USB stick. For the future, the introduction of new data by means of automatic distribution from the control center (base unit MX10) via the CAN bus is provided as an alternative - especially for applications with many devices.

There is no special hardware for "RailCom" in the control, because the detectors are located in the control panel and distributed in external modules (local detectors). Like all other data, the RailCom information reaches the MX32 via the CAN bus.

RailCom, the ability of the decoders to make feedback to the system, is an integral part of the new ZIMO system. Of course, the operation is also possible together with decoders that do not master RailCom; but better are RailCom capable decoders, namely those, which offer more than only CV values and the own address to report. In practice, this means that update-capable decoders are always preferable, whose software is actually further developed.

RailCom is also a prerequisite for the automatic locating of new locomotives in the system, which in the future will prevent annoying problems in connection with forgotten locomotive addresses.

The layout of the buttons comes from the proven MX31. The operating and programming procedures offer much more information and comfort because of the larger color display and the powerful 32-bit microcontroller with large memory (RAM and Flash together with several GB): locomotives, function icons partially animated, analog speedometer, Control bar, among others

As is the case with modern devices, it is strived that the operation is possible without extensive study of the operating instructions ("intuitive ..."), which of course is only conditionally possible. During ongoing use, the user finds on-screen indications of the current options, e.g. the current assignment of the softkeys and other keys associated with the flexib. If necessary, a context-related help file can also be displayed.

Since the MX32 has a complete set of "real" buttons (including the slider, the sroll wheel and the rocker button), the touch function of the screen is mainly used to change the display mode (switching between small and large locomoto, Scales, points of switches in the future signal boxes, etc.).

In the operating mode "DRIVE", thanks to RailCom (with a suitable base unit of the new generation) there is continuous contact with the controlled vehicle as far as the decoder and central station support it: display of the real speed at the screen speedometer, the engine load and the anticipated stopping distance.

The operating states "SERV PROG" and "OPMODE PROG", ie the programming "Service mode" or in the "Operational mode" ("PoM"), also form a focal point. Also external decoders (from other manufacturers than ZIMO) are supported by CV handling with command line storage and CV set management, ZIMO decoders in an extended scope. RailCom with its function of CV-reading in normal operation (without programming track) is also very helpful here.

The "WEI" operating mode (referred to as "traditional" for this purpose) combines points and signals in "switching panels", regardless of their connection points, on different decoders and modules, where they are operated by numeric buttons or touch. Apart from the switch points and ABA's already known from MX31 ("automatic operation sequences"), miniature track-forming consoles are also planned for the future on the hand controller, probably in conjunction with software on the computer, such as STP or ESTWGJ.