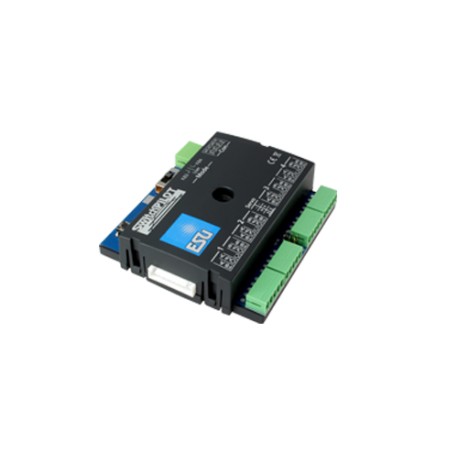 The SwitchPilot V2.0 is the second, improved version of our proven accessory decoder. It is a robust multiprotocol switch and switch decoder for switching up to 4 double coil magnetic articles (e.g., switches) or 8 consumers such as decoupling rails or incandescent bulbs (e.g., turnout road or house lighting). Its intelligent software allows it to be used under DCC or Motorola®.

The SwitchPilot can be used under DCC and Motorola®. It is compatible with the DCC standard and is addressed with soft commands. When using Motorola®, addresses 01 - 127 are possible. The operating mode is fully automatic.

The SwitchPilot can either be supplied directly from the digital center or separately from a DC or AC voltage transformer. Up to four double coil drives of all known manufacturers can be connected to its 8 transistor outputs, each with a 1A continuous output power. The switch-on duration can be freely selected from 0.1 s to 1 second per output, in order to prevent the drive from burning through without a final cut-off. In this mode, the SwitchPilot behaves k83-compatible.
Alternatively, a continuous output mode can be selected for each of the outputs in order to supply light signals or other consumers such as switch street lights or house lighting directly through the SwitchPilot. Effects such as "zoom" or blinking function help you to create realistic light signal images and / or railroad transitions. The SwitchPilot takes over the most important features of the well-known k84 decoders.

But the SwitchPilot V2.0 can be even more: Two conventional RC-Servos directly controlled. For each servo, the two end positions can be set individually as well as the positioning speed. Irrespective of the track system and the track width, it is thus possible to achieve particularly model-oriented, slow and powerful turnout drives, e.g. for controlling shape signals or railroad transitions. The servo pulse can be switched off when the end position is reached. Furthermore, the power supply to the servo can be interrupted to prevent "hum" of some inexpensive servos.

In conjunction with an ECoS control center as an ideal "partner", the SwitchPilot can capture and display the actual safety position when you mechanically prepare your switch or switch: finally, you have the certainty that your switch has actually switched correctly!

The SwitchPilot can be programmed flexibly: on the one hand it supports all DCC programming modes including POM (main loop programming). A central control unit with a programming track output is provided, so all settings can be controlled and changed. Alternatively, you can also assign the address directly at the SwitchPilot via the programming button: Press the button - Activate the command for the control panel - done.

As with our locomotive decoders, the SwitchPilot is also characterized by the fact that the switchPilot is designed to protect against overload and short-circuit.

The internal software of the SwitchPilot V2.0 can be replaced at any time with the help of the ESU LokProgrammers by new, more up-to-date. This keeps you up-to-date with standard changes and benefits from new functions.