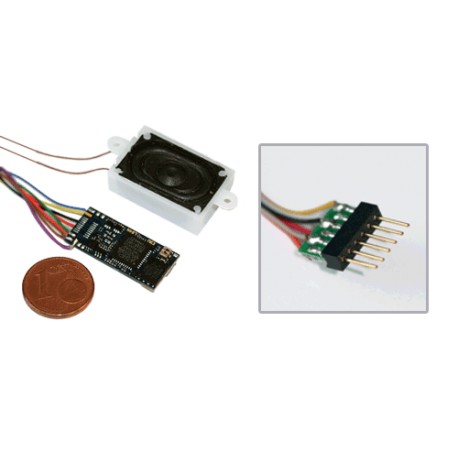 Standard delivery with "universal sound for self-programming".
Deviating sounds can be ordered for an extra charge:
To do so, please select the "desired sound" option and fill in the text field.

This product is no longer in stock

There is no need to dispense with any mechanical obstacles during installation: The LokSound micro V4.0 contains a complete digital decoder, which speaks DCC, Motorola® and Selectrix®. It even succeeded in integrating two additional function outputs, in addition to the sound part of its large brother and the two light outputs.

The LokSound micro V4.0 recognizes the DCC, Selectrix® and Motorola® protocol. In DCC mode it can be operated with 14, 28 or 128 speed stages or can be used on analogue DC systems. You can use either two-digit or three-digit (1-127) or four-digit (1-9999) addresses or assign a traction address (consistAddress).

The Selectrix® protocol also allows the use of the LokSound micro V4.0 decoder with these proven systems.

All common DCC brake systems, such as the well-known Lenz LG100, but also the new Lenz ABC brake modules with asymmetrical DCC signal, are also taken care of as braking in the DC section with reverse polarity (Brake on DC) or the Selectrix® diode brake section. The well-known Märklin® braking distance can also be used - also in DCC operation. Of course, our top decoder also computes the calculation of a constant braking distance so that your locomotives always remain correctly before the red signal regardless of the speed.

The decoder can switch between all operating modes (Motorola®, DC, DCC, Selectrix®) fully automatically during operation. This is important if parts of your system are controlled analogously (for example, shadow stations).

They expect a superb engine control from a LokSound decoder. The LokSound micro V4.0 is equipped with load regulation of the improved, 5th generation. In this case, the control frequency can be adaptively adapted to the speed at a base frequency of 40 kHz and provides for an even better, silently smooth, absolutely quiet motor run on many engines. The 10 bit A / D converter allows your locomotives to crawl super-slowly on the system. With Dynamic Drive Control (DDC), you limit the influence of the load regulation and can regulate the speed at the station and switch area, while on the (fast) route, the locomotive is slower on a hill.

The load regulation is perfectly compatible with all common engines, whether from ROCO®, Fleischmann®, Brawa®, Bemo®, Faulhaber® or Maxon®. 0.75A continuous current are more than sufficient for the above mentioned motors and offer enough power reserves even for long trainings.

The most important component of the new LokSound micro V4.0 decoder is the noise module. Therefore, a super-large 32 MBit flash memory chip was used, on which up to 276 seconds original sounds can be stored. The LokSound micro V4.0 works with 8 polyphonic channels. This means that up to eight noises can be routed simultaneously via the 16-bit mixer and the new low-noise D / A converter. This results in a much better image of the complex aggregates of the prototype because several channels can be "bundled". The noise is passed on to the loudspeaker by the new, digital "class D" audio amplifier with up to 3 times higher volume than before. Also here nothing was left out and used for the LokSound micro V4.0 decoder loudspeaker with 4 Ohm impedance. Use the extensive selection of newly developed loudspeakers for this!

All individual sounds of the LokSound micro V4.0 decoder can be individually adjusted in volume. As this works with almost every digital center, there is no more obstacle to an individual adaptation to your model and your preferences.

The new superflexible soundegine without a rigid flow chart allows the simulation of all conceivable rail vehicles.

The LokSound micro V4.0 decoder can also be used on analog DC tracks. The engine control system also contributes to the engine maneuver and synchronizes the driving and light functions with the noise functions. This means that model trainers without a digital system can also benefit from the LokSound, although without the sound triggered by the function key.

The LokSound micro V4.0 decoder has four function outputs with a continuous current of 150mA, each of which can be individually assigned a function. In addition, there are two unreinforced outputs with logic level. All important lighting functions are available, such as flashing lights, flashing lights, flasher lights, fog lights, etc. The brightness of each output can be set separately. The decoder is, of course, capable of automatically engaging and disengaging when uncoupling Roco®, Krois® and Telex® couplings, and now also offers a main beam function. The "LED mode" ensures correct lighting effects when using LEDs.

You can connect a Powerpack to the LokSound micro V4.0 as you would with all other ESU decoders of the 4th generation (ESU Item No. 54670). This energy storage supplies the decoder with energy if the current consumption is not optimal due to soiled rails.

A particularly important function is the integrated RailComPlus® function. This means that your locomotives will register at a suitable digital center automatically and quickly, and will receive a new address if necessary. Forget the tedious typing and programming!

LokSound decoders are firmwareupdate-capable. This means that the internal software of the decoder can be replaced by new versions if required. All you need is the ESU LokProgrammer and a PC.

ESU as a market and technology leader in the sound field takes your demands on the sound very seriously. For the LokSound V4.0 decoder, more than 200 different sound variants are now available. ESU is constantly expanding this noise library and offers you all the sounds on the homepage for download. Of course, free of charge.