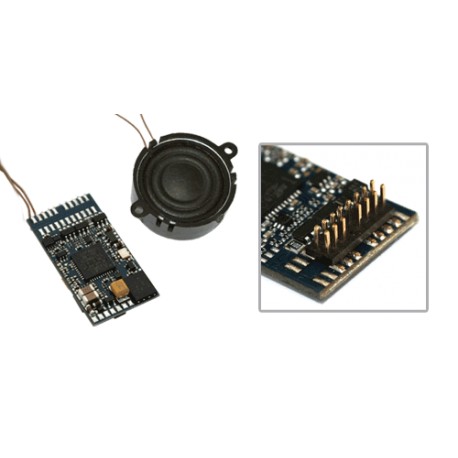 Standard delivery with "universal sound for self-programming".
Deviating sounds can be ordered for an extra charge:
To do so, please select the "desired sound" option and fill in the text field.

This product is no longer in stock

The LokSound V4.0 M4 is the world's first quad-protocol decoder. In addition to the DCC, Motorola® and Selectrix® protocols already known from the LokSound V4.0, he also understands the M4 protocol. This decoder is thus 100% compatible with all mfx®-compatible control panels on the market. He logs in there independently and can be programmed fully graphically. This decoder is thus the first choice for all Märklin friends who do not want to do without mfx®.

The LokSound V4.0 is available in variants with an 8-pin or 6-pin interface as well as a cable-free variant with a 21MTC interface or as a version with PluX16 or PluX22 for newer Fleischmann so that you can retrofit all your locomotives with this one thousandth gear ® or ROCO® vehicles.

Depending on the variant, the LokSound V4.0 can support up to 4 data protocols and can be used everywhere. Except in the DCC protocol with RailComPlus detection, it also logs on to Märklin®Center with M4 protocol automatically. The well-known Motorola® and Selectrix® formats were also installed for owners of older systems.

The LokSound V4.0 decoder can also be used on analogue and alternating current paths. The engine control system assists the engine maneuvers and synchronizes the driving and light functions with the noise functions. This means that model trainers without a digital system can also benefit from the LokSound, although without the sound triggered by the function key.

No matter what control center you use, the decoder is always integrated perfectly. It is automatically registered with the Märklin Central Station® control panels thanks to M4 detection and up to 16 functions are available. It goes without saying that the control panel can be used to change all parameters exactly as you are accustomed to.

Under DCC, up to 28 functions are available. On an ESU ECoS with RailComPlus®, this decoder logs in automatically in a matter of seconds and also displays all functions.

Even owners of the "old" Märklin® 6021 need not stand back. A maximum of 4 addresses per decoder can be used to switch up to 16 functions. A built-in programming mode also allows reprogramming with this venerable control center. Last but not least, the decoder also performs reliably on Selectrix® control panels.

This all reads too much to be true? It's even better: the LokSound V4.0 M4 decoder detects all important braking distances. Whether a Märklin® braking system, a Lenz® ABC braking system (with a slow-running function), a Selectrix® diode brake section or the ZIMO® HLU® system are used: The decoder always recognizes the required operating mode fully automatically. The fact that a constant braking distance can be defined during braking is a matter for us as the inventor of this function.

They expect a superb engine control from a LokSound decoder. The LokSound V4.0 is equipped with a fifth-generation load control system: the control frequency can be adaptively adapted to the speed and provides for an even better, silently smooth, absolutely quiet engine running with many engines. With Dynamic Drive Control (DDC), you limit the influence of the load regulation and can regulate the speed at the station and switch area, while on the (fast) route, the locomotive is slower on a hill.

The most important component of the new LokSound V4.0 decoder is the noise module. Therefore, the LokSound V4.0 has a super-large 32 MBit flash memory chip, which can store up to 276 seconds of original sound. It operates with 8 polyphonic channels. This means that up to eight noises can be routed simultaneously via the 16-bit mixer and the new low-noise D / A converter. This results in a much better image of the complex aggregates of the prototype because several channels can be "bundled". You will immediately notice the difference! The sounds are passed on to the loudspeaker by a modern "class D" audio amplifier. Combined with the ESU high-performance loudspeakers (4 to 8 Ohm) you achieve an unmatched sound spectacle. All individual sounds can be individually adjusted by CV in the volume.

Depending on the version, the LokSound V4.0 decoder has four to six (6) amplified function outputs, each with 250mA output power. The versions with a 21MTC interface have two uncharged logic outputs in parallel so that the NEM 660 can be used. All important lighting functions are available, such as flashing lights, flashing lights, flasher lights, fog lights, etc. The brightness of each output can be set separately. The decoder can of course be used to automatically switch off and release when uncoupling Roco®, Krois® and Telex®-