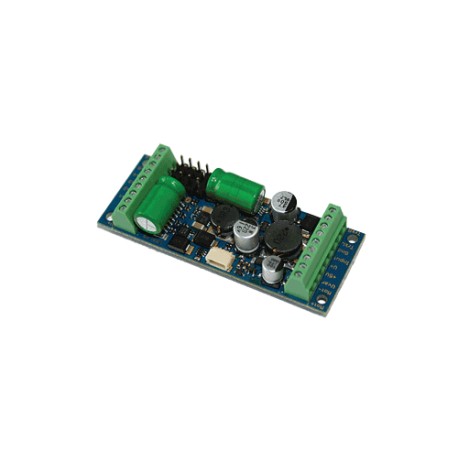 Even the largest of all LokPilot decoders, the new LokPilot XL V4.0, can not hide its lineage. He has mastered the data formats DCC perfectly with RailCom-Plus®, Motorola®, Selectrix and M4 together with automatic registration. As a representative of the garden track and large track decoders, it was equipped with a high motor output, 8 function outputs and 4 servo outputs as well as a PowerPack. Screw terminals ensure easy installation.

The LokPilot XL V4.0 is a quad-protocol decoder. He speaks the data format DCC as well as Motorola®, Selectrix® and M4. In the DCC format, 14-128 speed steps are as self-evident as 2- and 4-digit addresses. Up to 28 functions can be triggered. Thanks to RailComPlus®, the decoders are automatically activated at a suitable digital center (for example, ECoS).

It handles all DCC programming modes and can be operated and programmed with all DCC-compatible digital centers: Thanks to RailCom®, the CV values ​​can also be read out on the main balance with suitable control panels. Auxiliary registers exist for central units which can only program the CVs of 1-255 (for example, ROCO® Multimaus).

Motorola® users benefit from up to 28 speeds at 255 addresses. Three other Motorola® addresses allow the triggering of 16 functions. A built-in programming mode also makes reprogramming possible with the venerable Control Unit 6021.

The M4 protocol allows automatic logon to mfx®-compatible control centers (e.g., Märklin® Central Station or mobile station). At these control units, reprogramming is possible, just as you are used to from the original Märklin® decoders. ESU is 100% compatible.

The LokPilot XL V4.0 decoder recognizes the Märklin® braking distances as well as the ZIMO HLU braking commands or the Lenz ABC system. Braking with DCC brake blocks or with DC voltage is also possible. In addition, it also applies to a Selectrix® brake diode.

The LokPilot XL 4.0 decoder can be used on analogue and alternating current paths. Here, the engine control system adds "manners" to the engine.
As expected from ESU decoders, the decoder switches between the operating modes fully "on-the-fly". Usually nothing has to be set.

The LokPilot XL V4.0 decoder is equipped with a fifth generation engine control unit. The control frequency can be adaptively adapted to the speed and, on many engines, provides an even better, silky smooth, absolutely quiet engine running. With the aid of 5 parameters, the load regulation can either be adapted manually to the model or the decoder measures the engine characteristics in a test run by means of "auto-tune" and adjusts itself to fit. Its motor output is loadable with 4.0A current (short-term even with 5A). This means that enough "steam" is also available for PIKO® locomotives or heavy two-engine locomotives. All engines known in the G track or garden track range, in particular Mabuchi®, Bühler®, Escap® or Faulhaber®, can be controlled without any problems. With Dynamic Drive Control (DDC), you limit the influence of the load regulation and can regulate fine in the station area, while on the route the locomotive is slowly sloping on a hill.

Because we know that there is much to switch in large locomotives, there are eight function outputs for lights as well as additional 4 servo outputs for couplings, pantographs or other mechanical toys. Of course, the decoder generates all the necessary auxiliary voltages itself. All important lighting functions are available. The brightness of each output can be set separately. The decoder controls automatic engagement and disengagement when decoupling for ROCO®, Krois® and Telex® couplings.

Like its predecessor, the LokPilot XL V4.0 is also a PowerPack energy storage directly on the decoder soldered and helps even smaller locomotives with few axles reliably over docks.