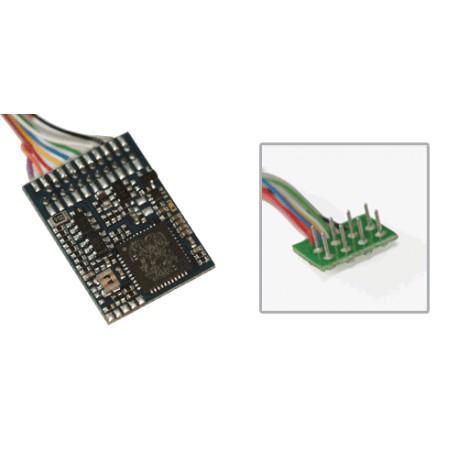 The LokPilot V4.0 decoder will be offered in several variants. In addition to the full range of multiprotocol decoders (DCC, Motorola® and Selectrix®), there is also a DCC version and an M4 version. Numerous interface options ensure that you will always find the decoder suitable for your locomotive.

Depending on the DCC, Motorola®, Selectrix® and M4 variants, the LokPilot V4.0 can be used. The LokPilot V4.0 recognizes all the most common types, and it can also be used in DC and AC mode, and it can recognize the operating modes automatically "on-the-fly." Up to 9999 addresses in DCC mode or 255 in Motorola® operation are a matter of course The LokPilot V4.0 also supports the RailCom® standard completely and can be used with all of the following: The Zimo® HLU, Märklin® or Selectrix® diode brake circuit standard digital centers.

Also new is the connection possibility for an external "PowerPack". This (as of 2011) optional energy storage can supply the engine up to 2 seconds during current interruptions and finally lets dirty tracks forget!

They expect a perfect engine control from a LokPilot decoder. With the LokPilot V4.0 ESU introduces the improved fifth-generation load regulation. At a base frequency of 40 kHz, the control frequency is adapted adaptively to the speed. The result is an even better slow-down behavior, especially in the case of older 3-pole motors or bell-type anchors. In addition, the control can be adapted to the model. ESU sets the new standard. You will find no better regulation anywhere. Promised.

Despite all new functions, the new LokPilot V4.0 is 9% smaller than its predecessor, making it even easier to install. In addition to the well-known versions with 8-pin and 6-pin NEM interface and a version with 21MTC interface, there is now also a version with a PluX12 plug (on the cable harness), which can be directly plugged into many new ROCO® locomotives.

The LokPilot V4.0 decoder has four 250mA loadable function outputs that can be individually adjusted in brightness and can be used with different light effects such as flashing light, firebug simulation, flash and double bit, ditch light etc. The 21MTC interface also has two logic outputs that can be used to bring you to life using the 51968 adapter board. The decoder can of course be used for automatic uncoupling and uncoupling for Roco®, Krois® and Telex® couplings, and now also offers a main beam function. The "LED Mode" ensures correct light effects when using LEDs.

The LokPilot V4.0 supports all DCC programming modes including POM (main loop programming). Also for Märklin® 6020®, 6021®, mobile station® and central station® all settings are made electronically. For these control units, the LokPilot V4.0 decoder has a proven, easy-to-handle setting procedure. Changes made in Motorola® operation also affect DCC and Selectrix® operation and vice versa.

It is particularly convenient to set the parameters for the owner of our ECoS control center: On the large screen, all possibilities are displayed in the clear text and can be changed in the simplest way - even during operation.

The LokPilot V4.0 supports the wrong driving bit, which is essential for operation on Märklin® systems, so that locomotives that enter an analogue section into a digital section do not immediately go back again. After an interruption of the operation, the decoder will immediately start again as soon as possible.

The LokPilot V4.0 is protected against short circuits and overload, can be updated and can be conveniently programmed with the ESU LokProgrammer on the PC. A brand new software for the brand new decoder can be downloaded from our website. The software helps you to configure the decoder. So much comfort must be. With the LokPilot V4.0 you not only buy a very good decoder, but also benefit from ESU's years of experience in the production of innovative digital decoders.