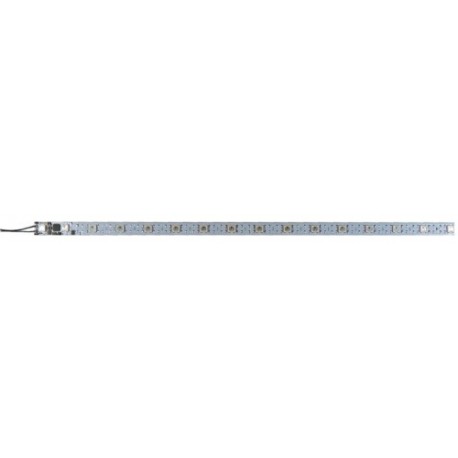 This light board replaces the digital LED light boards offered since 2004. Besides the self-evident things such as digitally controlled switchable light, this new light solution offers a wealth of new application possibilities for the model trainers who were not otherwise thought of anywhere else. While the integration of a digital decoder with the digital LED is a sensation, the 10 years later is a matter of course. This board can be much more and still cost in the frame. The new possibilities are achieved by massive use of new technologies. On the board there are 17 processors which individually control each LED light point in its brightness and color.
The possibility to select the light color as desired (16 million color possibilities (sic!)) Fixes a often rolled problem: which light color fits the car. You do not have to make this decision at the time of purchase, but you can always choose one of the preset color sets or define a color yourself. This also facilitates storage for both model railway owners and dealers - there is only one platinum type!
Thanks to the entirely new, innovative implementation concept, many new possibilities can be realized.

Each LED is actually a RED / GREEN / BLUE building block which contains a separate processor for light mixing. This processor receives its commands from the DCC decoder. This makes the simple shortening possible by simply snipping at any point. The control computer in the LED not only mixes the color but also ensures a constant brightness. This is also independent of the number of LEDs.
Each LED can be easily moved to its position by soldering. This allows accurate alignment of the LEDs on compartments or window axes of models. It is also possible to completely remove an LED, here the LED is replaced by a wire bridge. Each LED can be assigned individually or in any group up to 32 of a function key F0-12.
The light effects can be set via CVs and can also be individually assigned to the respective LEDs.
The external function outputs are assigned to F0 by default. The main application is the switching of peaks and / or tail light. The power consumption should not exceed 100mA per output.
The internal power supply of the board converts the track voltage to 5V with a switching regulator. Together with the processor LEDs, this ensures a constant brightness independent of the track voltage. The 5V enable the direct connection of 5VGoldCaps. also 2.7V types can be used by switching 2 such 2.7V gold caps in series. Pay attention to low-resistance capacitor types. Many multi-layer capacitors (gold caps) are available in electronics retailers which have 50-800 Ohm internal resistance. These are unsuitable as buffer capacitors because the voltage drops too much at 50mA when discharging.
Gold caps with 0.047F to 0.1F are also available in small designs. This allows N and TT Bahner to equip the cars with generous buffer capacitors. Afterglow times of 10-20 seconds are thus playfully possible.
The wiring and mounting of the LED board is very simple. The two supply lines to the track, that's it. The board is attached in the wagon by means of double-sided adhesive tape. Due to the low power consumption hardly any waste heat is produced, damage to the car roofs as often happens with incandescent bulbs can not happen. The cabling in the car can also save space with thin CuL wires, the power consumption typically below 50mA allows this without danger for the thin wires.
Easy configuration for standard cases without long pondering. By setting CV 32 the colors are quickly and easily converted. For experienced users, there are of course all functions similar to the NMRA Function Mapping function keys. The occupancy was expanded to 2 CVs per key and now occupies a wider CV space. The programming is carried out with any DCC control center, Lokmaus is supported with pseudo-variables. The decoder supports both POM and ServiceMode programming. In the ServiceMode, please first switch off the light. In order to enable as many model trains as possible a comfortable programming, only CV's below 250 are used.